There’s a new holiday that everyone should celebrate. “Obscura Day”—an international happening of environmental discovery. This year, it took place worldwide on Saturday May 30. Sponsored by the online website Atlas Obscura, Obscura Day is like an “art crawl” evening of neighborhood galleries, except that the sites are all over the world.

Here in Minnesota, we had two Obscura sites open to the public. Actually, Atlas Obscura lists roughly ten sites for our state. Check the Atlas itself for places near you and in 30 countries. You will find a variety of hidden and fascinating attractions for family fun.

Our two Obscura Day sites included the Wabasha Caves in Saint Paul—large natural rooms in the limestone bluffs of the Mississippi River that have been the home to Native Americans, Gangsters from Chicago, and a supper club. I made it to the Minneapolis site—the memorably named “The House of Balls” (HoB). 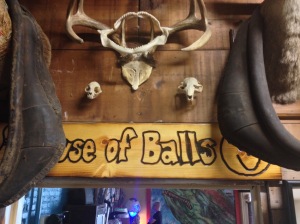 Many Minneapolitans have heard of the House of Balls and recall its unusual name, perhaps because it is open to so many interpretations. But not so many people have actually been there. My friends and I were particularly lucky to be among the first to visit their new home in a former gas station near Cedar-Riverside in Minneapolis. Designed by Ralph Rapson, FASLA, “Cedar-Riverside” was one of two “New Town in Town” projects sponsored by HUD  in the late 1960s to build mixed-income communities in cities. The other is Roosevelt Island in New York. 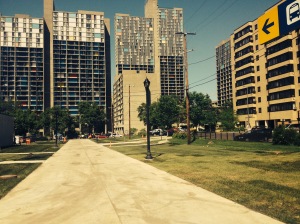 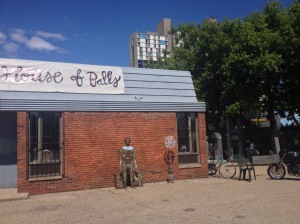 With its bright panels and cast concrete structure, Cedar-Riverside is now home to one of the largest populations of Somalis outside Somalia. It’s just across the light rail stop from House of Balls’ far more humble gas station home. They make a nice pairing.

“Period Rooms” without a Period 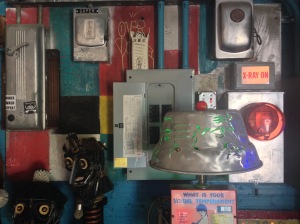 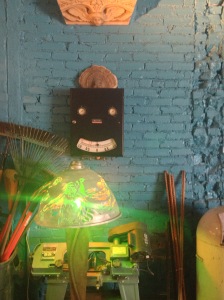 Founded by artist Allen Christian several years ago, HoB has grown from a small bowling ball and sculpture collection/studio to a work of environmental art. Inside, each of the rooms, the old bathroom, office, waiting lounge, and the garage bays has a distinctive character. Filled with Allen’s art that I will not even try to describe (see photos instead), the new House of Balls is like a museum of period rooms…each stylistically-unified with its own strong aesthetic. Yet the art rooms at House of Balls come from no particular period but rather Mr. Christian’s imagination.

Outdoors at House of Balls

I first met Allen when his House of Balls art truck took part in the ice art car parade that I described herein in February. Well, it’s a lot warmer now and I took a summer photo of the truck to pair with my winter shot. 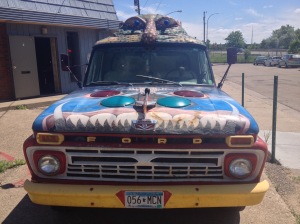 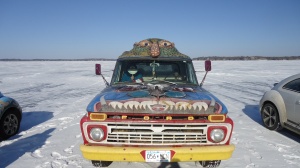 Allen also has a fine Scamp trailer outside customized with Wonder Bread dots. Inside, there’s a little model of it. 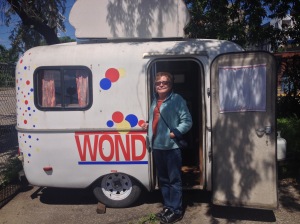 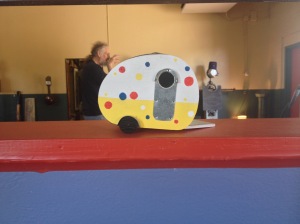 By the garage bays, just by the boxelders and light rail stop, there’s a sculpture garden with large galvanized ducts that Allen has carved out with a plasma torch. You can see the Cedar-Riverside towers in the background. 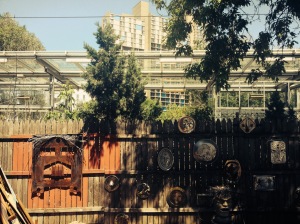 As a special event for Obscura Day, he let visitors try to the torch out on their own. I watched a few people carve their names in letters on small steel slabs. The sparks burned white hot as they flew through the metal. I’ve always been afraid of complicated tools and hot things like welding. But, Allen calmly worked with the visitors as they cut their art. 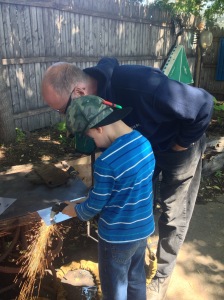 And finally, after a boy and girl did it, I thought, “what the heck, my deep fears about this plasma torch are just ridiculous.” So I put on heavy goggles and tried it too. I was a little nervous at the start (see Bethesda posting herein about putting gas in my car). But then I got going, cutting out a kind of fleur-de-lys tree that I’ve always drawn.

I remained a bit jumpy and went too fast so the torch cuts didn’t quite go through the metal. Allen told me to slow down, and I did. When the tree was done, I was so proud and showed it to my friends. They were polite and said nice things…looking a little surprised that I had actually used a plasma torch. I was too really…and learned that one of the best things about obscure places and participatory art is how they afford us new insights and daring feats that we thought we’d never try.